Two Boys and A Donkey Makin' Tracks Down The Dusty Road

The dusty path between town and home was covered with tracks.  One set belonged to a barefoot boy and one set to a donkey.  Every hundred yards or so, the barefoot tracks would switch to shoe tracks that ran along side the donkey.  Racing was a measure of the boy on the donkey against the boy on foot.  From school to the 'oldman's house' was one leg of the race.  At the end of that leg, an apple awaited all three, both boys and the donkey.  Eating the apple and resting up for the next leg home, gave the boys a chance to visit with the old man and tell him about their day at school.  He in turn shared the stories they liked to hear about when the old man was young, and how he knew their Dad and Granddad in the old days when they were early settlers in Ward County, Texas.

"Yep, I knew your folks when they got here in a covered wagon.  Uncle George, your Granddaddy, had a way with horses and he passed that right on to your Daddy, and now you boys show a real promisin talent with horses, too."  He pointed out to them that the donkey wasn't quite the caliber horses he knew they were destined to own, but was a right good start.  "I jest imagine you two will be right good with cattle, too." he added as he began the yarn about how their Mama had stayed behind in a snow storm to help birth a calf.

"It was a sleetin and a snowin, and that wagon jest kept getting farther and farther away, and yore Ma stayed til that calf was born.  Then she wrapped it up in her slicker and carried it across her saddle while the mama cow followed.  That musta been somewhere between Odessa and Grandfalls," he told the boys as they finished their apples.  The old man spit apple seeds into the dust, and continued with his tale.  "Now, your Grandma Carroll was mighty proud of her daughter for gettin that old cow and her new calf home.  Yes siree, that Stella was quite a gal."

The apples finished, and the sun going down, prompted the two boys to say their thanks and good byes and be on their way home a mile or so down the dusty road and across the ditch.  Both boys riding the donkey, the finishing of the race could wait til tomorrow, rode across what passed for a bridge going across the ditch.  They would ride a ways down the ditch line looking for their Dad.  Looking into the sunset with squinting eyes, they spotted him nearly a half mile down the ditch.  As they rode in his direction, they talked about how they would like to ride horses and be bronc busters.  In the meantime they would just ride the donkey and admire their Dad's big horse he rode as the Ditch Rider.

Reaching the big horse that had to be lots of hands high, the boys jumped down to help drag the clump of weeds and sticks from the ditch.  Down the ditch the water could now flow until it blocked up again, and their Dad, the Ditch Rider, would get there to untangle the debris so the water could flow again.  That was his job, and one that had to be done for the 'Ditch Irrigation' to work.  The contract with the water district maintained that the water from Brush Dam was allocated for the farmers in the Grandfalls area of Ward County.

Backtracking the ditch on their way home, the boys wondered what they would eat for supper.  Probably, the apple was going to have to last until morning, unless one of them could figure out something to fix for supper.  Sure enough supper was meager, but the beans and cornbread filled them up and the cool breeze of spring fluttering the worn curtains in the small house found them in bed not long after sun down.

Rising early, the two boys started off to school.  Somewhat reluctant about going on ths bright morning, Willard, admitted to MD that he wasn't all that keen on schoolin today.  "Mrs. Brandenburg has promised me a paddlin first thing every morning." he told his brother as they walked down the dusty road.  "Why's she whipping you before school even starts, and you haven't done nothin yet"?  MD wondered aloud.  "Well, she seems to think I'll be in her office sometime during the day for licks anyhow, so she thought it'd be a good idea to just get it over with early," Willard said as he threw rocks into the ditch as they crossed over.  "I'll fool her one day, and not do a single thing to get sent to the office for licks.  Think I coud manage that"?, he quizzed MD.  "Nah, I doubt it." MD said shaking his brown curly head and his laugh showing in his brown eyes.

The days of spring moved on to the days of summer, and the dusty road got hot and powdery under the boys feet as they worked, played and talked about riding horses and working on a ranch.  They argued about who was the best rider, and which of them would grow up to be a cowboy.  A tumble in the dust, a bit of rough talk, and lots of laughing at themselves ended with the two boys walking down the dusty road, arms slung over each others shoulders, and one boy saying, "I'll be derned, if you don't have a way with horses, Willard."

MD and Willard Pittman...Grandfalls, Texas in 1940 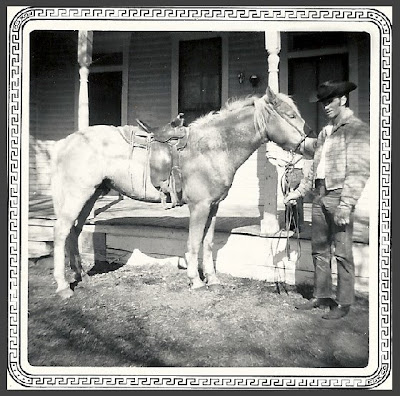