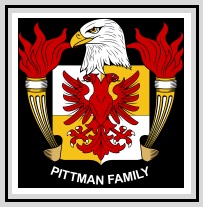 THE ANCIENT HISTORY
of the
DISTINQUISHED SURNAME
PITTMAN

Amongst the family names emerging through the mists of time from Holland and Belgium was the ancient posterity of Pittman and the distinguished history of this surname is closely entwined within the colorful tapestry of the ancient chronicles of Britain. They spoke in an old French dialect and were known as 'Walloons'.

The Flemish presence in Britain commenced about the year 1150 A.D., and contributed more to British industrial development than any other race. The Flemmings were the artisan industrialists of the low countries.

The Flemmings were recruited firstly in Scotland to develop Scottish industry. They became ardent Scottish patriots, so much so that at the storming of Berwick by the English in 1296, the Flemmings barricaded themselves in the Red Hall with such stuborn resistance they were buried to a man.

They later migrated south to Wales and the west of England where they spawned the weaving and the woollen industry. In Norfolk, Suffolk, and Hertfordshire they were particularly involved in paper making and erected several fine paper mills.

Professional researchers have carefully scrutinized such ancient manuscripts as the Ragman Rolls (1291-1296) a record of homage rendered to King Edward 1st of England, the Curia Regis Rolls, The Pipe Rolls, the Hearth Rolls, parish registers, baptismals, tax records and other ancient documents and found the first record of the name Pittman, in Devonshire where they were seated from early times and their first records appeared on the early census rolls taken by the early Kings of Britain to determine the rate of taxation of their subjects.

During the early and middle development of the name many different spellings were found in the archives researched. Although the name Pittman occurred in many manuscripts, from time to time the surname was spelt Pitman, Pittman, and these variations in spelling frequently occurred, even between father and son. It was not uncommon for a person to be born with one spelling, married with another and yet another to appear on his or her headstone. Scribes and church officials spelt the name as it was told to them.

The family name Pittman emerged as a notable English family in Devon where they were recorded as a family of great antiquity seated with manor and estates in that shire. They were of Flemish origin by the name of Pitschman, this industrial family settled in Devonshire at Dunchideock and were associated with the mining activities of the Cornwall Tin Mines. In the 15th Century being successful they branched to Oulton Hall in Norfolk, and Woodbridge in Suffolk. Their present family seats are at Eastcourt House and Dunchideock Hall. Notable in the family at this time was Ben Pitman of Trowbridge in Wiltshire, the U.S. immigrant who taught shorthand. Sir Isaac Pitman of the same family was the inventor of Shorthand.

In England the Flemmings started the trades of paper making, book publishiing, glass blowing, clothiers, glove making, and many more. Many Flemmings rose to high office and became members of the Peerage, including the Earls of Radnor, and the Earls of Clancarty.

During the 16th, 17th and 18th centruies England was ravaged by religious conflict. Puritanism, the newly found polictical fervour of Cromwellianism, and the remnants of the Roman Church rejected all non believers and fought for supremacy. During these turbulent times, the conflict between Church groups, the Crown and political groups all claimed their allegiances and their assessments, tithes, and demands on rich and poor alike broke the spirit of the people and many either turned away from religion, or alternatively, desperately renewed their faith, pursuing with vigour and ferocity, the letter of the ecclesiastical law.

The Flemmings were responsible in Ireland for the development of the fine linen trade, for the deelopment of Irish pottery, and gave their name to such streets in Dublin as Combe, Pimlico, and Spitalfield. The leader of the Flemish contingent in Ireland was General, the Marquis de Ruvigny of Port Arlington. There is no evidence that the family name migrated to Ireland, but this does not preclude the possibility of their scattered migration to that country.

In the midst of this religious turmoil of the middle ages, the New World beckoned the adventurous. They migrated, some voluntarily from Ireland, but mostly directly from England, their home territories. Some also moved to the European continent. They settled in Australia, New Zealand, the Carolinas, Virginia, Nova Scotia, Newfoundland aand the West Indies.

Members of the family name Pittman sailed aboard the armada of small sailing ships known as the 'White Sails' which plied the stormy Atlantic. These overcrowded ships were pestilence ridden, sometimes 30 to 40 percent of the passenger list never reaching their destination, their numbers decimated by illness and the elements.

From the port of entry many settlers made their way west, joining the wagon trains to the prairies or to the west coast. During the American War of Independence, many loyalists made their way north to Canada about 1790, and became known as the United Empire Loyalists.

The most ancient grant of a Coat of Arms found was : Quarterly silver and gold with a red eagle.
The Crest is a bird on a seashell.